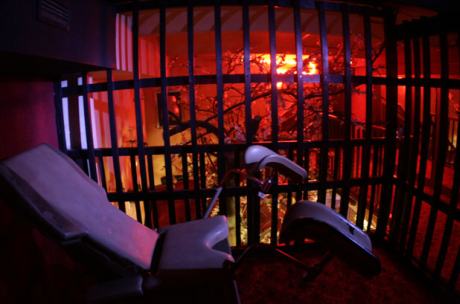 We visited on a Saturday night, a couples-only night every week. There are other nights where the club caters to different interests, including a Thursday night regularly scheduled gang bang with professional bangees.

Traumland is probably the nicest, best appointed sex club we’ve visited thus far. The first visit runs about € 104 including memebership. After that it is € 69 per couple. This includes a fairly decent buffet style dinner in a dining room, free drinks of brand-name alcohols from a well-stocked bar, and access to the entire club.

The club has approximately three floors (on four or so levels). One enters from the street into a small monitored room, and then one is admitted into a dressing room. They do not allow street clothes in the club. You get a locker key and a towel on entry. People are generally wearing something around the club, if only a towel, but it is not obligatory. There are no areas where nudity or sex are prohibited, but on the bar would probably be inappropriate.

One enters from the dressing room to the bar, which is nicely appointed and comfortable and has a lounge-style attached room where people seem to rest and engage in light play. Down a half flight of stairs there are toilets and another dressing area, sex segregated locker rooms, a sauna and steam room (both were cold when we visited).

The basement is, as our very cute psych major guide explained “middle aged” theme, including basic BD/SM play equipment such as whips, paddles and the like (though the hand implements were padlocked and we never did find out if there was a protocol for their use). There zone includes a huge castle-grade dining table with tie down points, a spinning rack, a fixed rack, and various padded and unpadded zones. Nobody was using it when we visited.

Upstairs is the play area. It is a warren of different rooms with different themes and lighting levels. Several are specifically configured for show/voyeur arrangements, all are quite nice. One includes a gyno-style chair for easy access, others have swings or various pads and supports or unusual lighting. One is almost completely dark.

The crowd is what one would imagine euro-swingers to be – a variety of 30-50 year old couples, some very attractive, some not so much. People are friendly and participative. Most speak some English, but German fluency would be a plus.